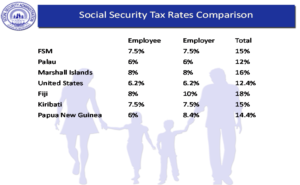 FSM Social Security Administrator Alexander R. Narruhn attended the FSM Resources and Development Conference at the Pohnpei State Governor’s Conference Hall on August 15, 2018. It was a nation-wide meeting coordinated by the Department of Resource and Development, involving relevant offices at both national and state levels, with participation from civil society and the private sector, to address issues impeding concerted efforts for social and economic development in the FSM. The objective of the conference emphasized the need to work together for better results.

The purpose of the conference resulted in the need to sharing ideas and agreeing on specific means to contribute toward coordinated implementation of activities to support our overall goals for social and economic development. In line with that, it occurred that presentations were given by different government agencies, both national and state levels, as well as other NGO’s.

The FSMSSA Administrator delivered his presentation on overall operations of the program. He touched on the history of the FSM Social Security and discussed the financial statements, wage earner counts and the history of Social Security taxes. The history of Social Security Program went way back since 1968 with its establishment under Trust Territory times. Fifteen years later after the dissolution of the Trust Territory Times, it then became the FSM Social Security Administration. Its governing body consisted of the Board of Trustees, a representative from each State level, as well a National representative and Administrator as Ex-Officio. There are 6,000 plus beneficiaries today. As a matter of fact, benefits paid out were always higher than tax paid in. Therefore, the FSMSSA tax division with its regulations are ongoing with their collections even with the challenge of the delinquents and so forth.