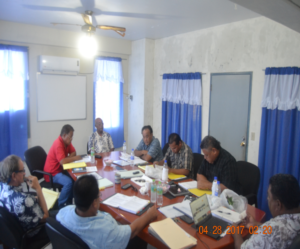 FSMSSA Board of Trustees held its 2nd Regular meeting of the year beginning April 28-29, 2017. The Board of Trustees’ meetings usually took place in the four states interchangeably, for the need of appeal case hearings and other businesses relating to the system’s needs. This quarter’s meeting was held in Pohnpei as the need to appeal hearings arose. The present Board members included Chairman Jack Harris representing Pohnpei State, Vice Chairman Vincent Tafileluw of Yap, representing Chuuk State Trustee Nakama Sana and Ex-Officio member Administrator Alexander R. Narruhn. As of date, Kosrae and National Government representatives are both vacant. Other attendees included Deputy Administrator and  investment consultant Daniel Roland, Managing Director of Raymond James. Consultant Roland was present for the investment review for FSMSSA, where he presents to the Board the status of the program financially and advised on money manager’s statuses and so forth. He did updates on these managers to make sure the program is in good hands regards to its finances. The Board as well entertained four pending appeal cases during its meeting. They then had the chance to come to their conclusions on each case. With the process, the appellants appeared in front of the Board to deliver their testimonies including some questioning from the Board members and with all the information gained and gathered, finally they could make decisions on the cases either to hold, deny or uphold decisions. This time the cases were taken care of and the meeting moved forward with reports and updates from the Admin. In its financial reports, Comptroller Tessie Dayao provided the presentation based on a comparison of two years 2015 vs. 2016. At the year ending 2016, net asset stood at $50,291,125 with a difference of $570,633 compared to 2015 which was $49,820,000. This amount consisted of 89% of the investment market value which is $44,818,947 and 11% consists of the accounts receivables and other accounts. Liabilities reduced at $181,000 which consists of payables to vendors, payroll liabilities and payables to beneficiaries.  As for collections $18,638,211 is an increase of 5.5% in 2015 with $17,674,000. The reason for the increase was based on an analysis made, which included the more new employers currently paying into the system compared to the previous year, meaning employers were paying more on their taxes that time. The second factor in the increase in collection of delinquent quarters increased by 90%. The 5.5% growth rate of 2016 may not be sustainable. Collections for first quarter 2016 increased, yet compared to first quarter 2017, it was flat, no increase. It was $4,660,000. there were new employers in 2016 that contributed about $16,000. Benefits increases by 3.5% to 19,906,488. the growth rate is 3.5% as compared to the previous year of 1.3%, so benefit is getting higher again. Total number of beneficiaries increased as of 2016 which equals to 6,473.  Admin expense was reduced by $34,397 or 2.8% reduction. The Board was again updated on the financial status of FSMSSA and the meeting carried on. In conclusion, the Board members each shared their remarks from their respective states including concerns from their people. Chairman thanked everyone for the effort in making to the meeting and appreciated all the work done throughout the hectic days.