FSMSSA Participates in a Series of Due Diligent Meetings

FSMSSA Participates in a Series of Due Diligent Meetings 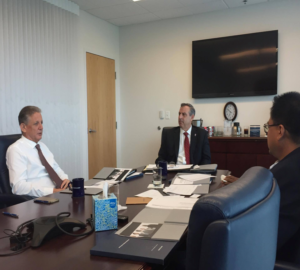 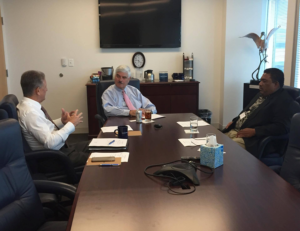 Jack Harris, Chairman, Board of Trustees, FSM Social Security, accompanied by FSMSSA Administrator Alexander Narruhn, and Daniel Roland, Managing Director of Raymond James, investment consultant to FSMSSA, conducted a series of due diligence review meetings at the home offices of service providers in the U.S. Visited were three of the investment advisors currently retained by FSMSSA; the FSMSSA investment consultant; and, the consulting actuary. The due diligence visits were held from Friday June 2, 2017, through Tuesday, June 6, 2017 and was convened at the Oakland, California offices of Adelante Capital Management (ACM). ACM has managed a Real Estate Investment Trust (REIT) portfolio for FSMSSA since 2015. In attendance from ACM were Michael Torres, CEO, Adelante Capital Management; Jeung Hyun, Portfolio Manager, Adelante Capital Management; and, Thomas Budinger, Vice President, Adelante Capital Management. A number of issues were discussed, including the historical performance of the FSMSSA Trust Fund account managed by ACM; the future outlook for REIT’s; and, among other things, the status of ACM as an ongoing firm. Mr. Roland questioned why since 2008, firm assets had declined substantially. The ACM’s response was that it was directly a result of the 2008 global financial crisis and the resulting flight to safe havens, such as bonds. In ACM’s case, it was exacerbated by their client base being highly concentrated in large public funds. They also met with Tortoise Capital Advisors, LLC ((TCA), whom has managed a Master Limited Partnership (MLP) portfolio for FSMSSA since 2015. As with ACM, the review began with a presentation on historical performance, and the outlook for the future. The fact that MLP price fluctuations were wildly disproportionate to their underlying valuations based on cash flow was discussed in-depth. It was noted that the prices more recently have been highly correlated to spot oil prices, and not reflective of the underlying yields and future income growth. TCA mentioned that large institutional investors had been adding to their MLP exposure since the steep drop in prices. The next sets of meetings held were with Robert Burns, Director, Institutional Consulting Services; and, Griffin Suit and Jake Norris of Asset Management Services. They addressed the performance reporting, asset allocation and investment manager research functions they are responsible. Of key concern to the Administrator were the occurances in custody reporting with respect to following month adjustments. Mr. Burns indicated that this would occur, infrequently, when correcting data was received after statements were generated. Possible scenarios to address this were discussed, to include delaying statements for several days, as well as upgrading reporting to the Clearwater System. Finally, on Tuesday, June 6th, a due diligence meeting was held with Jonathan Cangelosi, Principal, of Golden Capital Management (GCM). GCM has managed small/mid cap equity portfolio for FSMSSA since 2008. After addressing performance of the portfolio, which was deemed acceptable, the discussion centered about the possible effects that might occur due to the purchase of the remaining shares of Golden Capital not only held by Wells Fargo. Mr. Cangelosi was insistent that there should be no negative impact as all principal investment professionals were tied to the firm by contract, and that Wells Fargo had no intention of involving itself in the investment management process. The rest of the meeting was discussions with the actuary, Joe Nichols, about cost statements needed for the upcoming proposed legislation and ways in which the benefit formula can be amended to help place the fund in a more sustainable state. They as well discussed the contract and timing of the next actuarial valuation and an experience study, which its main function is to examine the mortality experience of FSM and from that, to build the mortality table used in their calculations.  At the conclusion, the Chairman made it clear that FSMSSA would continue to watch developments closely.