A Public hearing was conducted with Congress on May 24, 2017 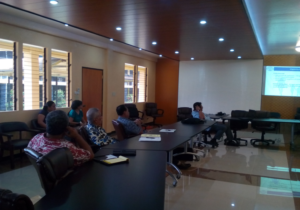 at 2:30 p.m. at Palikir, where FSM Social Security Administration was tasked to present its Financial Statements to the Committee of Health and Social Affairs. Present on our behalf were Trustee Sana, Administrator Narruhn, new nominee for the Board Kohsak Keller, Comptroller Dayao and Tax Admin. Officer Jonas. The chairman of the committee Senator Ferney S. Perman was present along 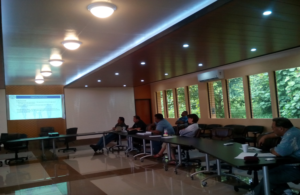 with Vice Speaker Moses, congress Counsel Catherine,  Yap Delegate Congressman Urusemal and a delegate of Chuuk, Senator Konman. Present also was Mr. Belsasar representing office of the President. At its onset, Chairman Perman welcomed everyone to the new facility and suggested that they began discussion with the new FSMSSA Board of Trustee nominee Mr. Kohsak Keller, then moved forward. A question was raised from the committee Chairman regarding how a Board member was selected and the response to that was, “it was a selection of the FSM President.” Keller stated that upon a conversation with His Excellency Christian, the subject got his interest and he did what was advised after sharing his experience in his field of work in the previous years. Mr. Keller himself shared his interest in the vacancy as a Board Member, so he became the nominee for the national government representative for the FSMSSA Board of Trustees. He stated his wish to support the system in terms of Actuarial for example and do the job as a Board member. The hearing continued with FSMSSA’s financial statements presentation which was given by Administrator Narruhn. Administrator did an overview of the system, shared updates on management and touched on claims as well. In the table below, you will find its financial statements as of the presentation. The committee was well informed about the status of the system and clarified on some subject matters they were not really sure about. It was great they managed to exchange thoughts and ways to support the FSM Social Security in terms of services to all old, current and living beneficiaries. The hectic exchange of thoughts and comments went well. There were no promises that the contribution will either keep coming or stop, but there are dedicated members who understood the need that FSMSSA has had. With all said and done, Chairman Perman thanked FSMSSA for responding to their request upon the public hearing and wished everyone for the best in the working together process. He then closed the hearing by thanking everyone present for allotting time for such important matter.