FSMSSA Board of Trustees meets for their 3rd regular

FSMSSA Board of Trustees meets for their 3rd regular

FSMSSA Board of Trustees had its 3rd regular meeting on December 3, 2018. All board members were present as well as Administrator and Deputy Administrator. It became common that every quarter, the Board meets to share updates, reports and exchange advices pertaining social security’s sustainability. It is another chance for FSMSSA Admin t 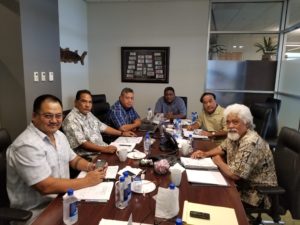 o update the Board of Trustees on matters or new information there may be. In return as the governing body of the program, the Board makes fair decisions for a better program. In line with the updates from Admin, Administrator Narruhn spoke of recent communications as of date. Narruhn further discussed some items in his communication, which included the progress of the lot, or office space to be provided by Pohnpei State Governor. Administrator had assisted with documents needed and asked the board to support the idea in communicating with the State Government. Narruhn assured the Board that the experience study had been finalized, and valuation first draft completed awaiting for more detail in a later meeting. Administrator shared the status of the amendments introduced with Congress last session. A major part of this regular meeting was about the FSMSSA 2019 Proposed Budget.  Public Law 5-120 mandates FSMSSA to present an annual budget not exceeding 11% of projected income for the ensuing fiscal year. Administration prepared budget comparisons of CY 2018 vs. CY 2019 and presented to the Board, which was thoroughly explained in details that the Board came in meets in the end by approving the FSMSSA Proposed Budget CY 2019. The percentage of Proposed Budget was 6.9% of income projection. The Budget Ceiling of 11%, with total proposed budget of $1,311,974, a decrease of 1.0% from 2018 approved budget. The meeting continued with FSMSSA’s Financial Statement and Tax reports. The Board of Trustees were well informed that with their queries being answered, and called off a productive meeting.