FSMSSA in need of an Executive Assistant (Vacancy Announcement at FSMSSA) 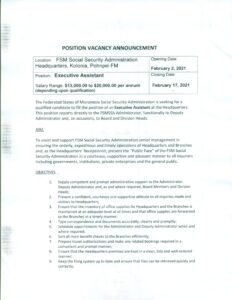 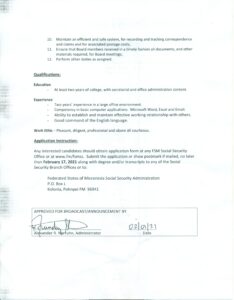 Interior Announces $820,600 in FY 2020 for Prior Service Trust Fund
Program Provides Key Support to Elderly in the Pacific

WASHINGTON _ U. S. Department of the Interior Assistant Secretary, Insular and International Affairs Douglas W. Domenech has authorized $820.600 in FY 2020 funding for the Prior Service Trust Fund (PSTF) Administration which distributes benefits to the more than 700 former employees of the post-World War II, . Trust Territory of the Pacific Islands (TTPI) in the Western Pacific.

“The Prior Service Trust Fund program is an ongoing commitment that the United States holds in the Pacific and in particular to individuals who previously served in the former Trust Territory of the Pacific Islands,” said Assistant Secretary Domenech. “We appreciate that the U.S. Congress provides these funds for the Prior Service beneficiaries who rely on them for important basic needs.”

Employee benefits provided through the Prior Service Trust Fund represent a responsibility assumed by the Federal Government following the dissolution of the TTPI in 1986. The program serves beneficiaries with five years or more of prior service. The four jurisdictions to emerge from the TTPI were the Commonwealth of the Northern Mariana Islands, the Federated States of Micronesia, the Republic of the Marshall Islands.
and the Republic of Palau. The Commonwealth of the Northern Mariana Islands is a U.S. territory. The latter three entities are independent sovereign Pacific Island nations who each share a unique relationship with the United States under a Compact of Free Association agreement.